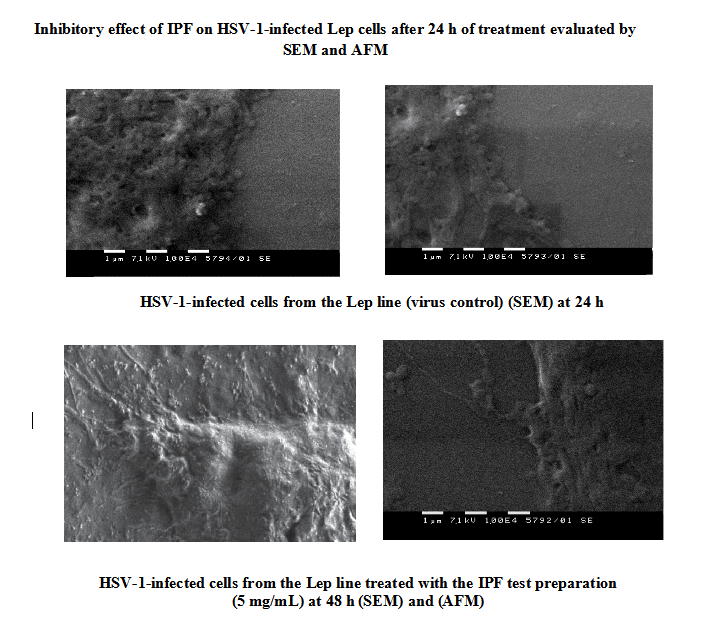 Following treatment with cells for IPF for 48 hours

Following treatment with cells for IPF for 48 hours, the production of infectious viral progeny is significantly reduced and viruses are rarely detected in the intercellular space, which in turn allows the immune system to cope more easily with the infection.

On microscopic monitoring of the morphology of the monolayers, it can be concluded that the IPF test substance administered at the MNC showed varying degrees of CPE inhibition in HCoV-229E-infected cells after 48 hours of treatment.

The best CPE suppression of HCoV-229E was observed after IPF treatment of infected Vero cells for 48 h. Similar experiments were performed to evaluate the effect of IPF on HSV-1 infected Lep cells. Initially, the antiviral activity of the test substance ΙPF was assessed by a CPE inhibition test. After infection of the cells with HSV-1, CPE develops in about 72 hours and results in the appearance of round cells, unevenly disseminated in the cell monolayer, with a tendency to foci and the formation of syncytia. Cell cultures were observed daily under a light microscope to develop CPE.

The effect of the test substances was reported 72 h (time for one replicate cycle of coronaviruses) after HSV-1 infection of Lep cells (pi.). The results of the experiments were evaluated on the basis of comparison with virus-free and no-added cells (cell control) as well as with HSV-1-infected cells without substance addition (viral control).

It is clear from the studies performed that unlike uninfected Lep cells, HSV-1-infected cells have a characteristic round shape, clustered in the form of “islands”, isolated from each other and separated from the substrate on which they are cultured and strongly vacuolated cytoplasm observed by inverter light microscope (Figure 7) and by AFM and SEM. On microscopic monitoring of the morphology of the monolayers, it can be concluded that the substances tested in the MNC showed different degrees of inhibition of CPE of HSV-1/HSV-2 infected cells after 72 h of treatment.